This is not how omelettes usually look for me – typically something goes wrong and they end up at least 60% scrambled. As a result, I rarely try to make an omelette and will just go for scrambled eggs, or sometimes a fried egg. The evening I made this one it was a last minute decision. I knew I had stuff for the salad pictured, but I could not figure out what the protein would be. Staring into the fridge I realized I had a carton of eggs, some cheese and some tomatoes. I had used this the other day to make some scrambled eggs that did not turn out that well (there was lots of sticking to the pan because I forgot to put some fat down due to my allergy headache). But then I recalled something Handsome said a few weeks ago when he made omelettes for us: “Cheese, tomatoes and eggs are all you need for an omelette.” 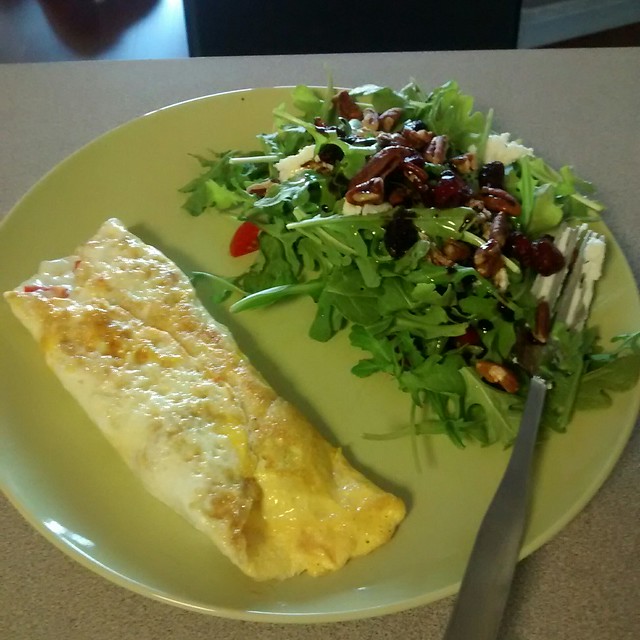 I’m really not sure what I did that night that was different from what I’ve done in the past. I read about food and cooking pretty widely, and I read a lot of recipes even though I do not necessarily intend to make them anytime soon. After some very focused attempts, I’ve managed to get the hang of making a decent fried egg without too much fuss. So I thought I would try to employ what I knew to make an omelette. Now that said, I did not stand around trying to think through what I wanted to do before I did it. I was too hungry. But somehow this turned out great, which makes me think that my tendencies to over-analyze things may stretch into areas of my life that I thought were free from angst. Anyway, just for posterity, and for a very scientifically-oriented friend who asked, here’s what happened in my kitchen that night.

Get out the eggs, tomatoes and cheese. Take a ramekin and a plate out of the cabinet.

Put the medium size, nonstick frying pan on the front burner and add some vegetable oil. Add a little bit more. Is that too much? I’m not sure. Too late now. Turn on the burner to medium high, then turn it down to medium since these burners are powerful. Wonder for the millionth time why both of the front burners on your stove are “power boost” burners.

Cut the cherry tomatoes into eighths, right on the plate. Didn’t Handsome say something about not using too many tomatoes? Realize while finishing this task that the pan is probably going to get too hot. Tilt it around to distribute the oil…ok that doesn’t look like it’s too much.

Hurriedly crack two eggs into the ramekin. Why don’t I have a fork out?! Mise en place! Grab a fork and whisk them as quickly as possible. They aren’t incorporated very well but dump them in the skillet anyway, there is literally NO TIME before it gets too hot!

Stuff the ramekin and fork in the dishwasher. Return your gaze to the pan and watch as the eggs start to set up. That seems too fast. Hurry up! Grind some pepper over the eggs and toss a little bit of salt on them. Scatter some of the tomatoes without really thinking about it so they wind up sort of on one side but sort of in the middle. Throw some shredded mozzarella on top of the middleish of the tomatoes. Is that too much? I think you’re not supposed to use too much cheese in omelettes. Too late now.

Where is the small spatula?! F$&% it’s in the dishwasher, from poorly scrambled eggs the other day. This is no time to be picky. Take it out and wipe it off on a dry dish towel. That doesn’t do much, but eggs are eggs, right? Sure. Good thing I live alone.

Tentatively try to poke at the sides of the egg, starting with the side where you can see the egg is not adhered to the pan. Notice that this side is over more of the flame, slide the pan over so the other side is more over the flame. Both sides release. This is not how this usually goes!

Now you need to flip one half of this onto the other half…but the tomatoes are not positioned well for this. Wiggle the spatula under the side with more open space and get it all up from the pan easily and in one piece. WTF? That never happens. Flip it over on top of the other half…but it doesn’t get all the way across the tomatoes. A decent amount of egg and cheese is still exposed.

Exposed cheese means flipping the whole thing over is a bad idea. Try to finagle things to get the other side to flip over on top of the exposed part, but it’s not quite big enough to stay put, it flops back over. Grab a wooden spoon to use that to try and … do something. It is unclear what. Rest the spoon gently in the middle of the almost-omelette.

Slide the spatula underneath the middle of the almost-omelette and loosen it from the pan. Maybe I can use this wooden spoon to sort of hold it down in the middle while and try to flip the stubborn side over…No, flip it the other way and make the heavy side fall down on the short side! Use the wooden spoon to facilitate this. (It is still unclear why.)

Marvel at the fact that this somehow worked. How on earth is the bottom of this not an unappetizing shade of brown already?

Start putting together the little salad you’re having with it. Remember that eggs cook quickly and you wound up with an over-hard egg last time you made fried eggs, so this is probably almost done. In a mild panic, scoop-dump it out of the pan and onto the plate next to the salad. This looks very official and omelette-y! Finish making your salad.

Marvel again at the fact that this omelette not only looks like an omelette, but an appetizing one at that. Take a picture with your crappy camera phone and post it to the social network of your choice. Bon Appetit!