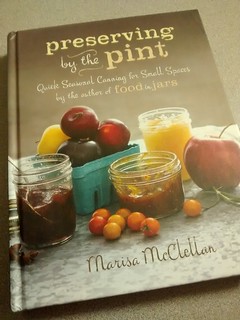 I was very excited to receive the new book from the canner behind Food in Jars – Preserving by the Pint –  as a belated Christmas gift. It’s a small batch canning and preserving book, which means the recipes are scaled down to work with smaller quantities of produce – just a pound or two of something. This is a great way to approach canning if you like to have lots of different types of things to choose from in your pantry. These quantities are also small enough that they are a great way to deal with CSA overflow and leftover amounts of things. I have a list of more than a dozen things from this book that I made, some of which will definitely be things I’ll do on those weeks when I know I won’t get through all the produce from my CSA. (I do have the luxury of choosing what I get each week, which helps.)

The book is organized by season, as these types of things often are, and the recipes are a nice mix of things that you preserve by canning them, and things that you preserve in other methods – fridge pickles, for example. In many cases, you can probably skip the canning if you’re planning to use the preserve soon. Generally speaking, these things are shelf stable in the fridge for a month or even two. (Just be sure you use clean utensils every time you go in the jar – I recently cross-contaminated something that then grew mold before I could finish it up. Sad.)

If you’re not canning something, any glass container will work for storage, so you can press a mixing bowl or a glass storage container into service, and in some cases you can also re-use cleaned jars from store bought items. You may also be able to buy singles of jars from your local hardware store (in Baltimore, the Ace Hardware in Waverly was doing this last summer) or from your local friend who cans. Um, you could also buy a flat of jars and give the extras to that friend, who I am sure would then turn around and give you a jar of something from his or her pantry. Just saying.

Anyway, shortly before heading to a conference for almost a week, I found myself with about a pound of leftover (store bought, duh) zucchini. I knew it wouldn’t keep while I was away, so I was casting around for a pickle recipe and settled on the Bread & Butter Zucchini Pickles from the book (here’s a Google Books link to the recipe). Because I was working with what I had, I omitted a couple of things I didn’t have hanging around – namely, the bell pepper and the onion. I also used cumin seed instead of ground cumin, and I think I might have had a bit less mustard seeds than called for – I used up all that I had. I whipped this recipe up and dumped it into a quart jar, let it sit out on the counter for a few hours and then stuck it in the fridge.

About a week later I brought them to a cookout, where they were a big hit. They’re bread and butter pickles, which I’m not usually a huge fan of, but these have a bit of a spicy kick to them that I really liked. They didn’t get mushy and I think would work well on a burger or stuffed alongside a hot dog or brat. I will definitely be making these again during zucchini season!