This arrived the night before I left on a business trip, plus I’d told Handsome he could unbox it, so the June box sat around for about a week and a half before  I even looked at the contents. 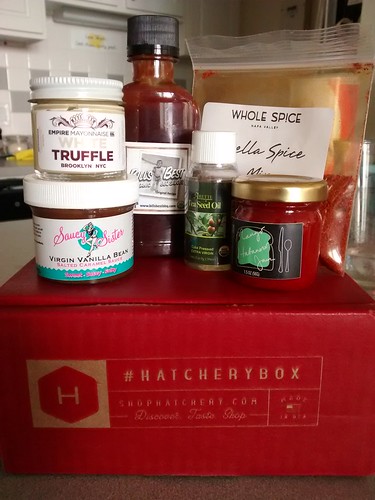 We used the mayo almost right away, serving it as a dip alongside some sauteed veggies. I came up with this idea because we’d gotten some garlic scapes as part of my farm share that morning. The recipe I found in Vegetarian Cooking for Everyone used the scapes in a combination of veggies served with a garlic mayo, so I figured this was a good use. The mayo was tasty – very creamy and thick – but I’m not sure I would have known it was truffle mayo if I hadn’t been told.

Tea seed oil is apparently a super healthy cooking oil, so I’m not sure I’ll try to do anything special with that. I am thinking of maybe attempting paella with the paella spices, and some of the suggested recipes sound good for the rest of them.

In other news, not much has happened with the May box. It came at a busy time and also a time when much of my cooking is dominated by what I get in my CSA each week. I used the salsa immediately, by making the quinoa burrito bowl again.

As a result, I’m a little backed up on Hatchery products: 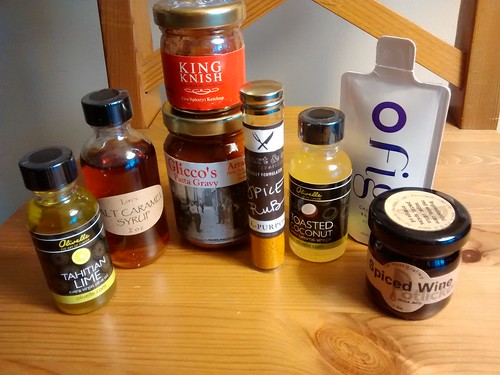 I did recently use the mustard from the April box with a chicken recipe from the Smitten Kitchen cookbook. We also used some of the spice rub from the May box to make the bacon from these BLTs. We did sort of make BLTs with it – bacon, a fried egg, some tomatoes and gouda, all served on ciabatta. They were very yummy, though I am interested to make the bacon again with balance of spice and sugar that is tipped a bit more the other way (as written it calls for twice the amount of brown sugar as spice rub).

These older items have not been forgotten – in fact I see them every time I open my spice drawer. Lately it’s been a matter of not having time to meal plan very well, or having the meals be dictated by the produce that’s in the house. I do have ideas for many of these remaining items, and I will be sure to share what I make as we get to them!