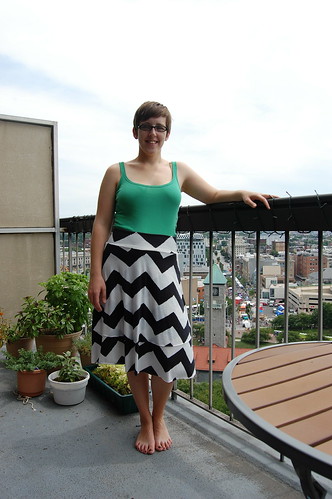 Earlier this summer, I got it into my head that I wanted a striped jersey skirt – a version of Kwik Sew 3513, which I’ve successfully made up previously, that is not relegated to “house clothes” status as my other two are. As you can see it turned out really well, and it’s very soft and comfortable to wear – perfect for summer in Maryland.

The fabric is from Jo Ann Fabrics, and is a knit called “Famous Maker Fabric Knits.” It’s very thin, so I dithered around a bit before I finally decided to buy twice as much as the pattern called for, and make a double layered skirt. Initially I’d thought that I would finagle things so that the stripes overlapped on the bottom and the overlay, but when I finally set about trying to do this, I decided that was not worth the time. Jersey is finicky enough to smooth out and cut, and ultimately I like that it’s not all matchy-matchy perfect.

I decreased the width of the waistband, which is designed to be folded over. On my other two versions of this skirt, it tends to hit right at my thickest point, and the folding adds a lot of bulk, which is not particularly flattering.

I do wish that I’d thought to cut the overlay pieces so that they were wider than the underskirt, so that it’d have a bit more swirl and flow. But that said, it’s obviously still a really great skirt! For others who might want to modify this pattern similarly, here’s what I did:

Cut two sizes smaller than the measurements indicate. As noted in my earlier post, the sizing runs big: generally speaking, you can go two sizes smaller than what the measurements tell you. I think that the easiest way to confirm this is to start with the waistband – cut that out in whatever two sizes smaller is for you, sew the sides together, and slip it on to see how it’s fitting. You can see how stretchy your fabric is, and if it will sit where you want to. Then make any adjustments you might need to the waistband, and those adjustments will tell you what size to cut for the rest of the pieces. (When in doubt, cut your skirt pieces on the smaller side – I’ve found I need to stretch the waistband gently as I sew the skirt to it, as the skirt pieces tend to have excess fabric. Though to be fair, this could be due to my rather laissez-faire attitude toward seam allowances when stitching this pattern.)

Cut the waistband so it’s half as wide. This is easy – the waistband pattern piece has a line across it to indicate where you should fold when you stitch it to the skirt pieces. I folded the pattern piece there and proceeded. On the finished skirt, I think this looks good unfolded or folded in half. (When folded in half, it’s also about the right width for 1.25″ elastic, so if you want to control the waistband a bit more, you can easily turn this into a casing.)

From there I sewed up the sides of the bottom and overlay (keeping them separate) and then simply held the bottom and overlay together and stitched them to the waistband. I don’t have a serger; I’ve used a zigazag in the past, but this time I used an overcast stitch. I lined up the cut edge of the fabric with the edge of the presser foot and stitched away. Worked like a charm.

Once I had the whole thing sewn together, I laid it out flat (this requires some shaking and patting) and carefully evened up the hems, as for some reason the bottoms of the skirt pieces are never the same length. It’s easy to fix, though.

The pattern calls for hemming the raw edges. Last time I zigzagged them after trimming, but this time I just left them be. They’ll roll a little bit, which I like – this is meant to be a casual skirt, not something I’ll wear to work. Skipping that step also means that you can make this skirt in a couple of hours, if that, which is really wonderful.

In total I used about 2 2/3 yards of the 4 yards I purchased. Rather than folding it exactly in half, I folded it over just enough to fit the pattern pieces. So, in addition to the leftover yardage, I have another yard or so of the portion that I cut from that’s a decent width. With my 40% off coupon, the final cost for this project was about $16! Pretty excellent if you ask me.