Handsome and I recently took a vacation to New Orleans, and had a great time. The weather was beautiful (high 70s or low 80s, sunny and very comfortable), things weren’t to crowded, and places had already started to decorate for Halloween, which was fun to see. In this post I’ll talk a little bit about where we stayed and what we did. I’ll round up the food and drink in another post.

We split the trip between two locations. From Friday – Sunday nights, we stayed with a friend who lives in the Marigny/Bywater area. Monday and Tuesday, we moved to the Bienville House Hotel, in the French Quarter. We picked the hotel in hopes that the new bar and restaurant – tiki themed! – would be open in time for our visit, but no such luck. The hotel was quite nice – our room had a small balcony looking into the courtyard, which had a pretty pool and seating area.

While staying with our friend, we kept mostly to the non-touristy spots. He’s an excellent tour guide, and enjoys playing host, so we just allowed ourselves to be shepherded around, which worked out great.

On Saturday, my platonic life partner and her suitor drove in from Mobile to meet up with us, and after we all brunched we wandered around the Piety Wharf section of Crescent Park briefly. This park is on the Mississippi River, and this section retained some of the old shipping piers and and railroad lines as part of the design.

After that, we made a pitstop to check out Lake Ponchartrain. We drove through some parts of the Lower Ninth Ward on the way over there, and it was interesting to actually see how uneven the rebuilding has been. There are fields that very clearly used to contain homes, homes that have been rehabbed and abandoned houses – all on the same block, in some cases. We spotted a few houses that still had the markings from the search and rescue teams. I found it very interesting, but must admit I was also a bit uncomfortable with being a disaster tourist.

From there we went over to Old New Orleans Rum for a tour of the distillery, which was founded by an artist, James Michalopoulos, who struck me as the Robert McClintock of New Orleans. Anyway, our guide gave us a great tour, which included sniffs of the rum in various stages of preparation, and a look at both the original and new equipment. I recommend this if you can get out there. (It’s not too far from the French Quarter, but it’s too far to walk and, as these things tend to be, is in a rather out of the way industrial area.)

Our next stop was City Park, and in particular the Sculpture Garden at the New Orleans Museum of Art. We wandered for a while, enjoying the weather and the views. The park was packed – we counted at least three weddings in the time we were there, and I also spotted a family getting some portraits taken. 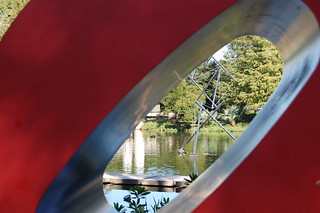 Sunday was mostly spent outside of the city, as our friend took us out for a swamp tour. Rather than go to the places slightly closer by, where the tours from the French Quarter will take you, we drove a little over an hour to Houma, where we took an airboat tour with A Cajun Man’s Swamp Cruise. The airboat tour doesn’t seem to be on the website, but when we went it was $45 each, and you have to call to check the times and make a reservation. We wound up being the only people to go out that day, which was fine with us. And we were out for almost twice as long as the 90-minute tour is supposed to last! (This is, perhaps, in part due to the fact that the boat got stuck at one point.) 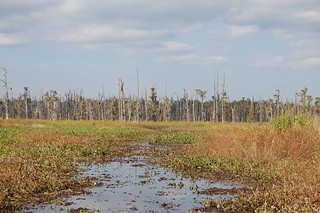 We saw a lot of wildlife, including baby gators, a huge old gator, bald eagles, nutria and tons of birds. The landscape was beautiful, though once you learn how much of it is made up of invasive species it looks a bit different. Click through the photo for plenty more from the tour. If you can get out there, this seems like a good tour to take.

We spent the rest of our vacation by ourselves, wandering around more touristy parts of the city. We did a walking self-tour of the Garden District, which is full of very well-kept, stately old homes from the 19th century. While there we took a quick peek inside Lafayette Cemetery No. 1 (it was closing for the day so we didn’t have much time), which was fascinating because it’s so different from cemeteries in New England.

We grabbed a cab that got us partway back to the French Quarter, stopping off on Magazine Street in the general vicinity of Jackson Ave., where we had seen some interesting shops and restaurants while in the cab earlier. This is a neat part of town to explore, but be aware that we had a terrible time getting a cab from there when we were ready to leave. As I recall, two cab companies refused to come pick us up, and another just never took Handsome off hold. (We saw a handful of cabs, but all had fares and were headed in the opposite direction.) We started walking back, but because I didn’t quite catch something Handsome said at one point, I spotted and flagged an empty cab after just a few blocks. Rescue cab! Anyway, if you don’t drive yourself out there, figure out a Plan B for how you’ll get back to wherever you’re going if you can’t get a cab. (For example, it turns out we were about five blocks away from the streetcar line back to the French Quarter, which we had completely forgotten about.)

Other places we went through over the course of the visit included the Frenchman Street Art Market, the French Market (mostly the flea market), Jackson Square and the St. Louis Cathedral. And of course, the French Quarter itself. All are excellent if you like to wander around looking at random stuff and window shopping, which we do. There are cafes and bars everywhere in these areas, so you can stop off at any time that you need to sit a spell or have a snack. The Frenchman Street Art Market in particular was very cool, it’s held at night and was just a great atmosphere. Not big but in a good location for you to stop in as part of your evening.

As you may have gathered, we spent a lot of our vacation walking around various parts of the city, with very few firm plans or times at which we had to be anywhere, which suited us just fine. We figured out the geography (if by “we” I mean “Handsome, who actually looked at a map for more than thirty seconds”) and had a fun and relaxing visit. There are certainly some things we might make a point of doing next time, including figuring out how to get two introverts to be interested in jamming themselves into a club at 10:30 at night to properly hear some music, but I think this trip was just what we needed – a break from any kind of schedule.

More to come on all the delicious things we ate and drank, some of which many of you have already seen on Facebook.