Coffeeneuring is, essentially, riding your bike around on fall weekends in pursuit of coffee. There are some rules — mostly intended to encourage you to go for a ride of more than just a couple of minutes, and to explore new places. There are also prizes for people who follow all the rules and do seven rides within a particular timeframe, but I’m playing a bit fast and loose with that part. (Certainly trying to stay true to the spirit of coffeeneuring, though!)

We took advantage of the fine weather on Sunday to take a second coffeeneuring ride, catching us up with the official challenge, which started off last weekend. We’ll promptly fall behind again this coming weekend, but with any luck we’ll have another lovely weekend later in the month and can catch up again.

I wanted to go to the farmer’s market, so we looked at options around Dupont Circle, where options abound. The easiest for our route was Kramerbooks & Afterwords Cafe, where we again had brunch. I do enjoy how they give you a little plate of carbs and jam when they seat you. We demolished that before we got very far with the coffee. 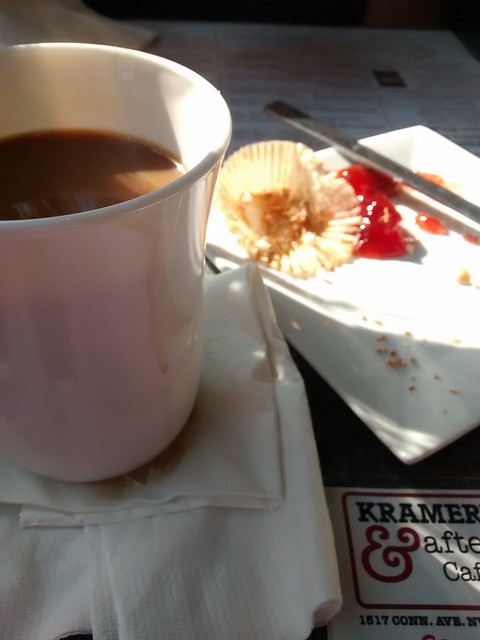 We kept it simple and stuck with regular old coffee, though I did notice that Afterwords also had a nitro iced coffee available. I hadn’t ever been inside the cafe, which is very open and airy. We enjoyed ourselves and the waitress was very attentive. (She had a magic touch with our wobbly table, I’ve never been anywhere that someone was able to fix a wobble in one go like she did.) The food was tasty and came out very promptly, even though it was quite busy.

We took nearly the same route over as we had take to Slipstream on Saturday, going up the Metropolitan Branch Trail, down R Street, and then down 19th Street NW to end right outside the cafe. On the way home, it was back across on Q Street until we hit Florida Ave, where we hopped on the sidewwalk until we got to 1st St NE. All told it was about 5.8 miles, and a very pleasant day to be out and about on a bike.

One thought on “Coffeeneuring 2015: Afterwords Cafe”