Let’s start off with a few numbers:

And how did I do on the goals I set for myself for the year? Not great, but that’s OK. It was a fun year!

END_OF_DOCUMENT_TOKEN_TO_BE_REPLACED

For a couple of years now, I’ve done a list-style update, but I’m not really feeling that for 2013. But I do like the random statistics I’ve pulled in the past, so I’m repeating that here:

Do more yoga and pilates. I quantified this as 30 classes per quarter (the rationale here was that with work-related travel, setting a monthly goal would, in some months, set me up for failure). I was close in the first quarter, with 27. Second and third quarters of the year, I was a ways off, with 17 classes each quarter. But in the last quarter of the year I ramped it back up and hit 53! Taking an average, I got 28.5 classes per quarter, which is pretty close to my goal. The stellar number from the final quarter is in part due to a three-week stretch when I was in a boot camp and working out 7 times a week. That was particularly great as it got me back into some good habits and routines around working out, and I’ve been pretty good at doing at home workouts occasionally.

Cook from my cookbooks. This I set at two recipes from a cookbook each month. I hit a total of 16 over the course of the year, with 12 of them being cooked in the first four months. What derailed this progress was summer produce season, when I have a lot of veggies coming in from the farmer’s market and my farm share. This means there’s a lot of free-form cooking, and also a lot of searching the internet to see what I can do with a particular veggie. Overall this did get me using my cookbooks more, so that’s good.

I’m thinking of signing up for Eat Your Books, which creates an online index of your cookbooks. For only $25 a year it’s probably worth it for me. I think I might also need to find a new place to save my online recipes, as delicious seems to be buggy and with a smallish active user base (at least for recipes) that makes me wonder how long it can hang on. I know everyone is doing this stuff on Pinterest now but I don’t want the visuals – I just want to be able to scan a list and use some sort of categorization or tagging system. If you have recommendations, let me know.

I haven’t seen Wreck It Ralph, so this is new to me. Thanks for sharing, Danielle!

Last year I did a list-style update that I thought was a nice way to recap the year. I’m repeating it this year, starting off again with some random statistics:

Overall it was a good year, but the theme was “life is expensive.” There was the crazy high electric bills at my old apartment, I moved again, there were problems with my student loan payments, some trips that I didn’t plan for at the start of the year, and I bought a new setup for working at home sooner than I’d planned. I just kept reminding myself that this is why I have a savings account. I somehow managed not to touch my emergency fund, though the student loan payment problems made me start thinking about it.

I’m also still trying to adjust to the higher rent at my new apartment – the student loan payment problems threw me for a loop at the end of the year, and I won’t really know what my 2013 take home pay looks like for a few more weeks. Everything is – and will be – fine. I wasn’t eating ramen for weeks on end nor did I have to turn down invitations just to save a few bucks, and I was grateful for that. Had any of this happened to me a few years ago, I wouldn’t have been able to absorb the costs. Hopefully 2013 will be a bit more predictable, financially.

END_OF_DOCUMENT_TOKEN_TO_BE_REPLACED

Still, I’m one of those people who gaze at every single baby photo on Facebook. It’s not that I hate children; that’s just not the life that I want. When my first really good friend had her baby, I cried out of sheer joy for her. But it actually strengthened my feelings about not wanting to have children because I felt overwhelming pride for her but no jealousy.

Five women on their decisions not to have children.

You’ll want to read Part 1 if you haven’t already. I’ve had my IUD for just over two weeks now, and so far so good. Depending on your tolerance/interest in these sorts of things, this post might be a little bit too much information. Consider yourself warned. (Alternatively, if this is not enough information – please just ask me and I will be glad to answer your questions.) END_OF_DOCUMENT_TOKEN_TO_BE_REPLACED

That’s an intrauterine device; specifically I’m getting a Mirena. (Your other option is ParaGard.)  END_OF_DOCUMENT_TOKEN_TO_BE_REPLACED

Not quite on time as I’ve been a bit busy with the conference, but this week’s favorite is my friend Catherine, the original Lady Date (TM) companion. We traveled to Anaheim together for the ALA Annual Conference and wound up having to kill quite a bit of time in the Phoenix airport due to a flight delay. We wandered around the maze-like Southwest terminal and spotted a gelato place, which seemed like an excellent way to pass the time.

Iced coffee! With beans brought back from Seattle, and made using my favorite new iced coffee method. Doesn’t take long at all and appeals to the part of me that has a tendency to over-complicate things. 🙂 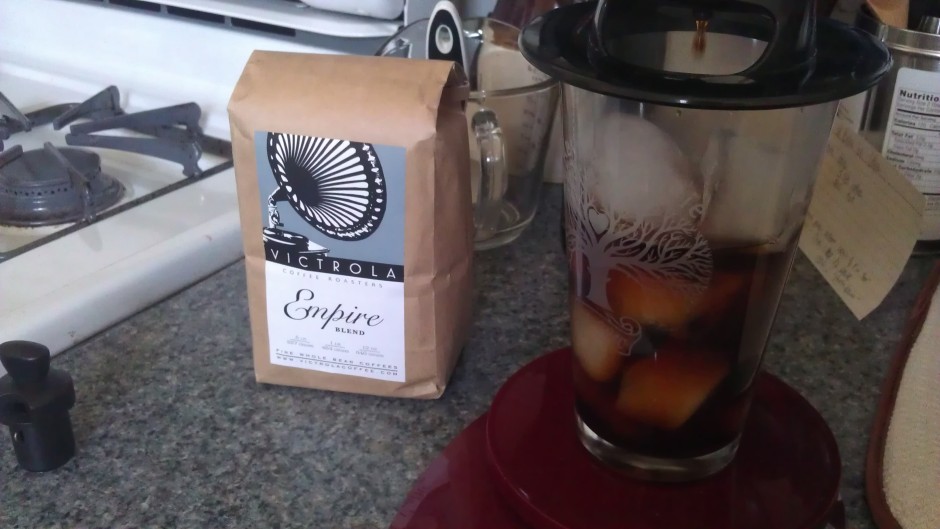 A day late, but I had an unexpectedly full evening yesterday!

In Baltimore, the second Friday of the month is Librarian’s Happy Hour. We meet at Howard’s of Mount Vernon, where the staff are super awesome and accommodating. They have a back room and as long as it’s not been rented out for an event, we just take over, rearrange tables and have it all to ourselves. They’re at the point where if they see a couple of us on a Friday, they bring a stack of plates and flatware back to those tables. Once or twice we’ve even arrived to find the tables all set for us. They have a nice long happy hour, which means you can get drinks and dinner pretty cheap if you’re willing to order off of their appetizer menu. Because they’re so great I always tip really well. Online reviews seem to indicate that a lot of people have trouble with the service when going there for a meal. Can’t speak to that but we have found it to be a great spot for our happy hour.

Yesterday afternoon, my friend Heather invited me to join her for opening night of Foot of Water at Single Carrot Theatre, so she met me at happy hour and then we headed out for that. Single Carrot is a tiny ensemble theatre company that really pushes the envelope. They stage weird and wonderful plays that are truly thought-provoking, and often have many layers to peel back. I’ve seen several of their productions, and while I often find that the descriptions aren’t particularly compelling, it is always, always, always worth going. Foot of Water is a play written by the ensemble that looks at the “sociology of sex” and of ritual. It was intense, weird, somewhat uncomfortable and I’m very glad I went. (Also there’s a really cool set.) We also attended the opening night reception, where we enjoyed some drinks and pizza from Joe Squared. Heather did the costuming for the show, so I got to meet the entire cast, who were all very friendly and seemed great. I really encourage you to go see a production there, and if you can, go on a night when they’re having a post-show reception so you can talk to the cast.